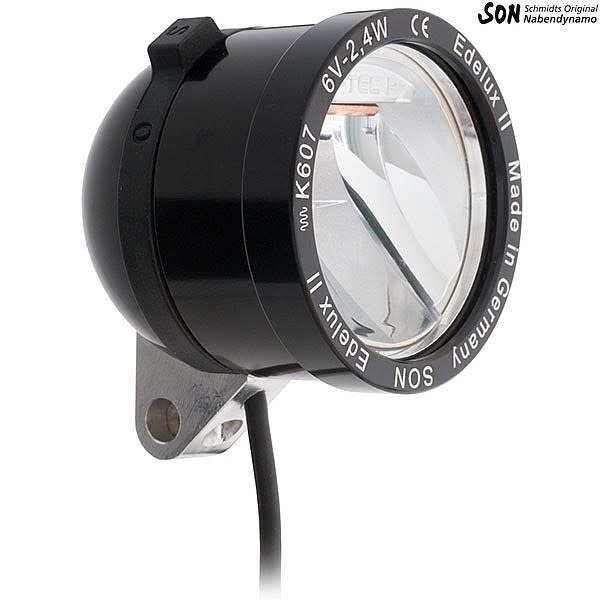 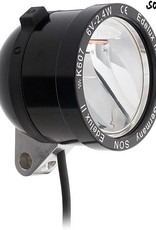 Wilfried Schmidt Maschinenbau of Tübingen, Germany makes several headlights for 6 volt dynamo systems. Their latest is the Edelux II which produces the brightest beam available at 90 lux at 15 kph, the German standard for lux measurement. The beam is shaped much like a high quality automotive low beam, bright at the top then getting progressively dimmer towards the bottom, resulting in extremely even illumination of the road ahead for the cyclist. It puts most of the light further down the road so you can see at a distance when descending a hill, and there's still plenty of light close to the bike. The Edelux II has an all aluminum housing and a high quality hard glass lens instead of a plastic lens, which is common on other headlights. For the winter commuter riding on sanded and salted roads, the Edelux II lens will remain clear for many years without clouding up from sand kicked up by passing cars.

Like the original Edelux, the Edelux II uses a mirror that Schmidt buys from their friends at Busch & Müller. The original Edelux uses the Busch & Müller IQ-Tec mirror, introduced in 2007, and the Edelux II uses the new IQ Tec P mirror, introduced at Eurobike, August, 2013. This new mirror projects a much wider beam than does the original, about twice the width. Yet, with new brighter LEDs, the lux measurement is still higher. So the road ahead is not only illuminated with a much wider beam, it's also a bit brighter.

But there's one more thing about this new headlight that is just extraordinary. In order to illuminate the road ahead evenly, there needs to be a smooth increase in the projected light from the bottom of the beam to the top. The further the light has to go, the brighter it needs to be at the source (the headlight) in order for the road surface to be evenly lit from the viewpoint of the cyclist. The older Edelux with IQ-Tec reflector did what I thought was an admirable job of producing an evenly lit road surface. But this new beam is even better in that regard, while still being so much wider and taller.

Why is this important? If the road surface close to the rider is brighter than the road at a distance, your eyes will have more difficulty making out details on the road at a distance when you're riding fast or descending a hill. On a fast descent, the further away you can see clearly, the more time you'll have to react to whatever it is you're approaching.